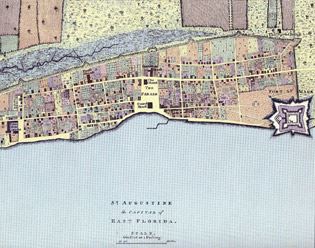 St. Augustine's archaeological heritage is unparalleled in the quantity and diversity of remains buried beneath its buildings, streets, and backyards. These deposits not only reflect the City's European origins since 1565, but also include a rich and varied Native American heritage that has been in existence for thousands of years.

Archaeology is the study of people in the past through material remains. As humans lived, worked, played, worshiped, and died, evidence of their activities are preserved in the soil. Archaeologists carefully study cultural deposits to answer questions about history and culture.

In addition, archaeology is a destructive science. As soil is studied and removed, the site is destroyed. The detailed documentation produced by archaeologists ensures that data is preserved and the site can be studied in the future. Only about 25% of archaeology involves fieldwork.

After excavations are finished, paperwork is checked for accuracy, copied, scanned and filed for future reference. Artifacts are then washed, sorted, analyzed, and prepared for long-term curation. Approximately every week in the field will require an additional month of follow-up work in the archaeology lab.

Most archaeological projects in the City of St. Augustine stem from local construction and development projects that impact buried cultural resources. In 1987, the City drafted an Archaeology Preservation Ordinance to protect its buried heritage.

The unique ordinance evaluates effects of ground-penetrating construction activities on both public and private properties. St. Augustine also is one of a few municipalities in the country that has an Archaeology Program, which averages 70 investigations each year.

The amount of information that has been obtained since the adoption of the City's Archaeological Preservation Ordinance provides an unparalleled resource for understanding and reconstructing what life was like in both the prehistoric and historical eras.

The Archaeology Program is staffed by two, full-time archaeologists and supported by a dedicated corps of volunteers who contribute to daily operations in both the field and lab.

The Intent of the Program

The intent of the City's Archaeology Program is not to stop or limit development, but to preserve sites through documentation when cultural deposits are threatened by destruction.