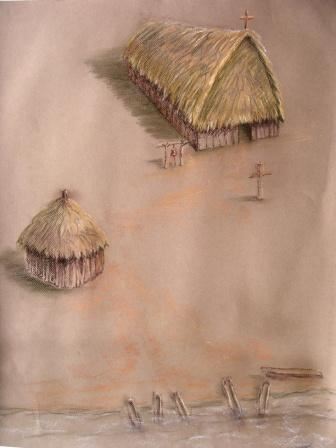 Situated in Archaeological Zone IC, Nuestra Señora del Rosario de la Punta (Our Lady of the Rosary of the Point) is the most intensively investigated 18th-century Native American mission community in the Southeast.

The mission community was established just south of the Rosario Line - a defensive earthen berm with bastions and redoubts - and was one of six mission communities that existed within cannon shot of Castillo de San Marcos, as illustrated on the historic Antonio Arredondo Map of 1737.

These communities represent the last vestiges of the once extensive mission system established by Franciscan missionaries in northern Florida and southeast Georgia from the late 16th century until the beginning of the 18th century. 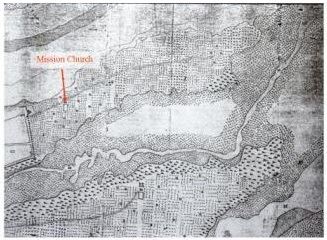 La Punta was occupied from the late 1720s until the mid-1750s when it was abandoned and its inhabitants consolidated into the remaining two mission communities: Nombre de Dios and Tolomato.

The mission was primarily occupied by Yamassee Indians, refugees from South Carolina who sought sanctuary with the Spanish after the Yamassee War of 1715. Apalachee Indians - originally from 17th-century mission communities around the Tallahassee area - also are listed on Spanish census records. Throughout the course of its approximately 30-year existence, the population at La Punta hovered between 40 to 60 individuals.

Besides being a refugee mission community, La Punta was part of the city’s comprehensive defense-in-depth strategy - representing a forward location that protected the Spanish capital of La Florida.

Since 1987, more than 25 archaeological investigations by the City have taken place in the 30-acre area identified as La Punta. Although the majority of these projects was limited to post-hole surveys and monitoring construction activities associated with single-family residences, a few have involved large-scale block excavations related to commercial development. The combined results form a mosaic of the various archaeological deposits that were part of mission settlements surrounding St. Augustine in the 18th century. 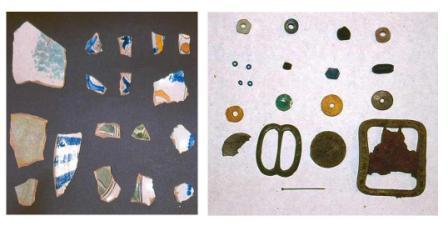 A cornucopia of archaeological features dating during the La Punta occupation has been discovered, with thousands of artifacts having been recovered. Documented features include:

The focus of the community was the church, with its attendant cemetery, and council house. Here Franciscan friars from the Covento de San Francisco-now the headquarters for the Florida National Guard-would conduct various religious services for Christianized Native Americans, which included burial under the church floor or walls.

The church was rectangular, measuring 47 feet (east to west) by 28 feet (north to south). Based on historical and archaeological information the church is thought to have been a frame structure with a palm-thatched roof. Centered just outside the east wall of the building was a pit containing four piglet hooves.

The pit is considered to have held a cross at the church entrance. Approximately 30 feet south of the church, a circular pattern of post holes was documented that may have represented a council house; it was 20 feet in diameter. No features or artifacts dating to the time period of La Punta were found between the two structures.

The church and the council house were situated roughly halfway between the northern boundary of the mission, as defined by the Rosario Line, and extensive marsh deposits to the south, but close to the shore of Matanzas Bay.

There is evidence that some members of the community had not fully accepted the Catholic religion. An isolated burial found 13 feet northeast of the church was oriented in roughly a north-south direction and contained a shell bead necklace and a greenstone axe.

The skeleton was that of a male who was between 25 to 35 years old. This was the only individual with grave goods. Other evidence for the maintenance of traditional Native American religious practices was the presence of red ochre in one of the graves, which has been documented in pre-Columbian graves throughout the Southeast.

Although the reason for placing four piglet hooves into the pit is unknown, it is may have had symbolic meaning that originated in prehistoric Southeastern ceremonial practices.

It is estimated that from 50 to 100 individuals were buried inside the church, with burial following Christian practices. A preliminary study of a small number of individuals - 10 were exposed during excavation - revealed some tantalizing insights into the mission population. Foremost is the fact that not all individuals were full-blooded Native Americans.

Based on incisors, which can be used to as a genetic marker to distinguish Native American populations, a few of the teeth were of non-Asiatic origin, suggesting an intermingling with non-indigenous populations (i.e, people of European or African descent).

The incisors from Native American populations have a distinctive shovel-shaped appearance, which have their origins in Southeast Asia where the ancestors of indigenous groups migrated from about 13,000 years ago.

The teeth also showed attrition and tartar, but lack the dental cavities that indicate a starchy diet. Also evident was that three of the ten individuals had healed fractures on the leg bones - two broken fibulas and one broken femur - indicating the hardships of life for a population that had experienced displacement and cultural disruption since the advent of European colonialism.

After the abandonment of La Punta, the area became home for some of the Canary Islanders brought to St. Augustine by the Spanish government to replace the dwindling Native American population.

The Pablo Castelló Map of 1764

The Pablo Castelló Map of 1764 illustrates the location of these homesites, as well as the ruins of La Punta’s church. Artifacts recovered from one of the homesites shows that prior to the Spanish withdrawal from La Florida in 1763 items, especially ceramics, were mostly English in origin. The growing trade or ability to obtain items between Spanish St. Augustine and English colonies along the Atlantic seaboard had been steadily increasing since the early 18th century.

Investigation of the Church

During the investigation of the church, it was discovered that this locale had been the site of a British Period (1763 to 1783) hospital site. Documented were a small well and a cache of broken bottles, which included a laudanum bottle.

Recovered artifacts suggests that the site was related to the military based on the presence of uniform buttons and a bayonet, which is in accordance with a map dating to 1777 that places a military hospital in the area. The hospital was south of the barracks for the British garrison stationed in St. Augustine during the Revolutionary War.