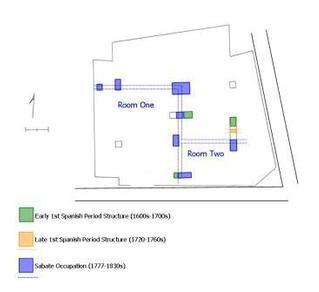 St. Augustine’s colonial downtown district exists as the most enduring location of European origin in the United States, having been settled since 1572. A diverse array of archaeological resources, the result of 438 years of concentrated human occupation, reflects the community’s multicultural heritage.

This report presents preliminary information from the Archaeology Division’s investigations at the Pablo Sabate Site in 2009. It illustrates the complexity of archaeological deposits derived from the continuous redevelopment. This project yielded an assortment of archaeological features and items dating from the late 1600s to the early 1900s, with some deposits reflecting the City’s more colorful past.

Field procedures involved excavating both systematic and judgmental shovels pits, some of which were later expanded into test units. The Archaeology Division examined approximately 4% of the lot. Ceramics provided date ranges for exposed features. Excavations resulted in documenting remnants to four colonial-era structures; demolition of the last colonial structure occurred sometime after the Civil War. 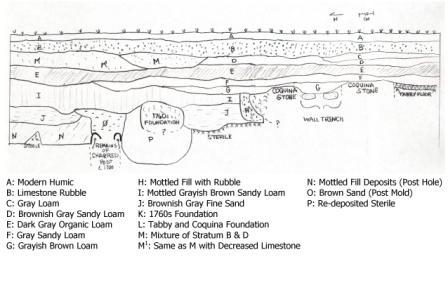 The earliest historic occupation is represented by the remnants of a post-in-ground structure. One of the posts evidenced charring, which could be indicative of the English-led sieges that occurred during the early 18th century.

Initial historical documentation of property ownership in 1763, lists Manuel Jacinto. No information exists about his origin or occupation, but the index to the1763 Puente Map states Jacinto lived in a “house of boards".

Overlying the charred post was an oyster-shell foundation with embedded ceramics and iron nails. This structure dates back to the end of the First Spanish Period (circa 1760) and most likely belonged to Jacinto.

In 1777, Pablo Sabate and his family arrive on the property as refugees from Andrew Turnbull’s New Smyrna colony, where they would live in a “house of palm” on the property; most likely a wood structure with a thatched roof.

How He Earned a Living

Of Minorcan origin, Sabate earned a living as a fisherman and farmer. By 1801, he had pursued other means of support, namely running a tavern. The Sabate family owned the property at the corner of Spanish and Cuna until the mid-1800s The structure, constructed in the late 1700s, was an L-shaped tabby building and consisted of two rooms, with a tabby floor and brick hearth recorded in Room One.

How the Structure Was Built

The builders used broken bottles at the base of the oyster shell foundation - a unique way to support the massive shell foundation as well as dispose of trash. Atop the foundation, traces of the tabby wall were still apparent. Numerous fragments from broken tumblers and goblets were recovered along the junction of the wall/tabby floor.

Coupled with the presence of coins, over 120 pipe fragments, iron cooking implements, and a marionette fragment in soil deposits dating to the 19th century, a portion of this structure is posited to have functioned as a tavern.

This neighborhood evolved from a primarily Minorcan area to an African-American enclave after the Civil War. Records from the mid-1800s to the late 1800s are unclear as to who owned the property.

A two-story frame vernacular dwelling, built in 1885, served as a rental house for working-class families. This structure encompassed the majority of the existing lot; trash deposits associated with this occupation most likely exist outside of the sample area. City Directories from 1899 to 1930, list the occupations of the people living on the site: a porter, a tailor, a laborer, and a laundress.

Oscar “Dixie” Canova and his wife, Estelle, bought the house and property in 1931. Locals recount Dixie as a bootlegger during Prohibition; Dixie would later open a bar on nearby St. George Street.

Demolition of the Home

The house on the property was demolished shortly after Dixie’s death in 1969. A city street paving project in the 1990s disturbed the upper soil levels of the lot and obliterated any deposits left from the demolition of the house. The St. Augustine Foundation purchased the vacant lot in 1978. In 2009, the Foundation contacted the Archaeology Division to test the lot prior to installing a formal garden.

Archaeological investigations at the Pablo Sabate Site illustrate the diversity of deposits that are typical for St. Augustine’s colonial downtown district. The 20 units excavated uncovered four historic structures: the earliest structure built of wattle-and-daub dated to the late 1600s based on an adjacent trash pit. Three of the structures were constructed on the same footprint, illustrating continuity in the use of space on Spanish lots.

The use of ale bottles as construction materials showed an opportunistic approach for acquiring construction materials during the Second Spanish Period (1784 to 1821). Documenting the Sabate occupation was the primary objective throughout most of the investigation. Discovering that a portion of the building served as a tavern was unexpected; however, it was not uncommon for the Spanish to use portions of their homes for commercial enterprises.

During the Second Spanish Period, more than 25 taverns were documented in the colonial downtown district - essentially a tavern per every block. The work undertaken is an excellent starting point for continued research into the material culture of a 19th-century Minorcan household and tavern.