Living in St. Augustine, residents enjoy proximity to the Atlantic Ocean and the beauty 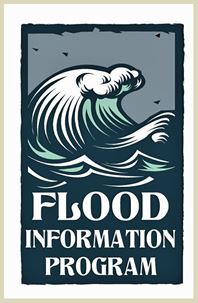 of north Florida’s natural environment. But along with these benefits come natural hazards.

Flooding is one of the most common risks to Florida residents living in floodplains, and in St. Augustine, 90% of residents live in a floodplain. As the Oldest City in the United States, St. Augustine has aging and undersized infrastructure. St. Augustine is prone to flooding from normal rainfall coinciding with peak tides, tidal surges accompanying coastal storms, tropical storms and hurricanes, as well as overbank flooding from rivers, creeks and tributaries. Localized heavy rainfalls can cause flooding due to the poor drainage qualities of some soils. Some of the water bodies in St. Augustine that could be affected by storms are the following:

The barrier islands such as Anastasia Island across Matanzas Bay provide some protection from storms, however, as the island developed, wetlands filled in and trees cut down, the ability of this habitat to absorb the brunt of storms deteriorated.

Flooding in the Area

View floodings in the area over the years: