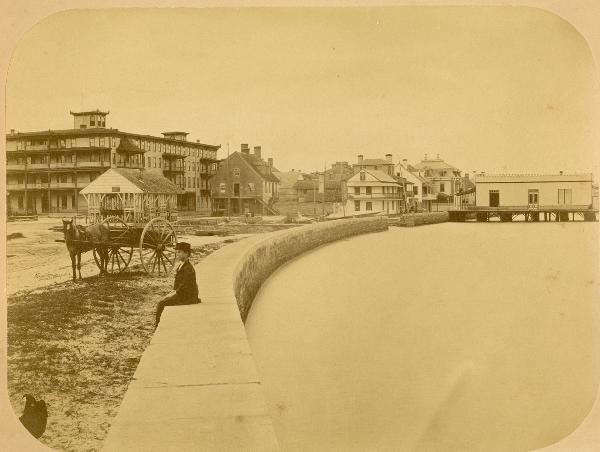 improved, the year after the completion of the Castillo de San Marcos - 1696 - when the Spanish began construction of a masonry seawall south from the fort to the Plaza de la Constitucion. By the time Florida became a territory of the United States in 1821, that seawall showed telltale signs of deterioration with some areas on the verge of collapse.

After the U.S. military demolished sections of the original seawall to use its coquina blocks to build a stone wharf in front of St. Francis Barracks along Marine Street, the breach caused flooding along the waterfront. Then, in 1832, much like now, residents worked together to secure federal funding to have the seawall rebuilt. They succeeded.

President Andrew Jackson signed legislation in March 1833 that included $20,000 to repair the fort and rebuild the seawall, and between 1833 and 1844, the section now under construction was rebuilt by graduates of the United States Military Academy at West Point, the first engineering school in the U.S. But the new 19th century wall was not without controversy.

Lieutenant Stephen Tuttle, who began construction of the new seawall in 1833, was court-martialed less than a year later for incompetence and for squandering most of the allotted funds. Lieutenant Francis L. Dancy reported that Tuttle's wall was poorly constructed and made little sense from an engineering perspective, built as it was atop the Spanish wall. After Tuttle was found guilty, Dancy was put in charge of the project. Dancy and disgruntled St. Augustine residents convinced Washington that the best move would be to demolish Tuttle's 870-foot wall and begin another wall 30 feet seaward from the Spanish wall, which curved the shape of the shore. 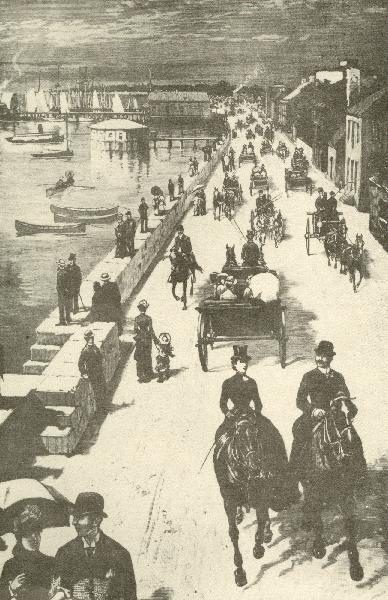 The new wall, Dancy hoped, would be aligned straight to widen Bay Street - present-day Avenida Menendez. Lieutenant Henry W Benham replaced Dancy in 1839 and saw the project through to completion in 1846. In October 1846, a hurricane caused a portion of the wall to collapse; it was later repaired with, among other methods, coquina blocks and pavers at the wall's base to protect the seawall from erosion - something archaeologists uncovered during excavations in 2003. In the latter part of the 19th century, the seawall became a popular promenade for romantic strolls and waterside socials. After dinner, people ventured out for an "evening promenade" with friends or lovers along the seawall or in the nearby Plaza.

Like stormy relationships among its human visitors, the seawall of yore was never truly against bad weather. Another hurricane in 1944 flooded Bay Street and reached the flood-prone houses at sea level along the waterfront. When Avenida Menendez was widened in 1959 and the old seawall was buried under the road, the waterfront north of the Bridge of Lions changed significantly with the addition of a new seawall that is now the popular promenade shere pedestrians once again stroll, runners exercise, and horse carriages await their next fare around town.