The historic St. Augustine Seawall has long been an integral part of the city’s fabric — a coquina sentinel from rough 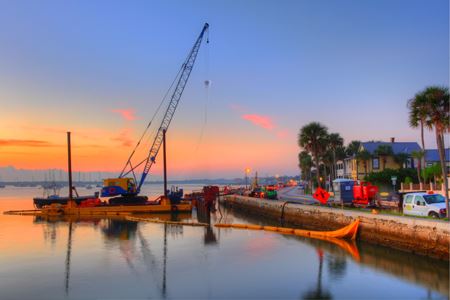 waters, a promenade for romantic strolls and waterside socials. The Spanish first began building the original seawall in 1696 south of the Castillo de San Marcos fort. The section now being improved was built between 1833 and 1844 by graduates of the United States Military Academy at West Point. But it has been battered by time and tide, from a devastating hurricane in 1846 that partially collapsed it to Tropical Storm Fay in 2008.

The historic St. Augustine seawall has been vulnerable to erosion, collapse and breach during stormy weather. From 19th century squalls to 21st century hurricanes and tropical storms, the wall and the streets around it have paid the watery price.

Construction of a new Seawall, scheduled for completion in April 2013, is a City of St. Augustine project, funded with help from the Federal Emergency Management Agency (FEMA). It is the culmination of more than a decade of research, advocacy, public input and the tireless pursuit of grants by many dedicated people.

The $6.7 million project is designed to protect the original 1800s Seawall and the surrounding historic waterfront neighborhood. Following its 2013 completion, residents, motorists, merchants and heritage visitors will be better protected from the unpredictable waters of the Matanzas Bay.

The new Seawall is being constructed 12 feet into the water from the old wall to protect the original historic structure. It will use concrete and reinforced steel, and the gap between the two walls will be filled in and paved so it can once again serve as a waterfront promenade with a paved walking path, new streetlights and landscaping.